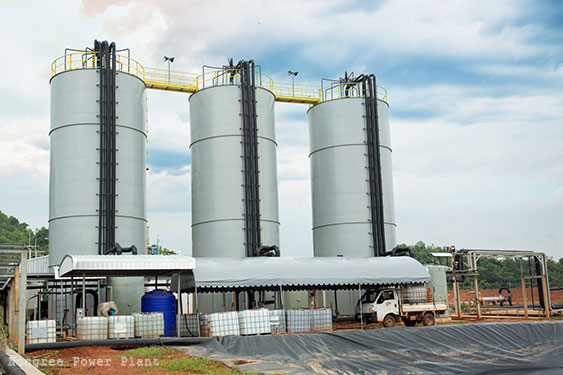 After the aforesaid process has been completed, AKW will become a direct subsidiary of TPW and an indirect subsidiary of TRITN which will have three directors from TPW or TRITN namely, (1) Ms. Louise Taechaubol, (2) Mr. Chirdsak Kukiattinun, and (3) Mrs. Narumol Chattawanandonedirector from the existing shareholder namely, Mr. SittipornJaratpridalap.

AKW generates and sells electricity to Provincial Electricity Authority (PEA), which the electricity is generated by biogas incineration from concentrated distillery slop with a generating maximum capacity of 4.9 megawatt. AKW started Commercial Operation Date (COD) to PEA on 4 June 2010 and entered into a sale contract with PEA for 5 years (can extended for 5 years at a time). The electricity purchase rate is based on the basic of PEA purchase price which will change due to the PEA policy about purchase price. AKW is located at 99/1 Moo8 Sa Krachom Subdistrict, Don Chadi District, Suphan Buri.

Currently, the AKW temporarily ceased its COD because AKW is in the process of renovating the power plant about engineering design and new engineering management, anaerobic digestion system or digester to create biogas with the desired amount according to engineering principles, increasing number of machines and equipment related to process of electricity generation including the purchase of 32 rai 3 ngan 20 square wah land. Under the management of a new executive, AKW will able to resume COD operations and expected to resume operations in Q4/2020. AKW will use funds which received from the capital increase in the amount of 1,450,000 shares, with a par value of 100 baht per share, in total of 145,000,000 baht which is used for the above operations.